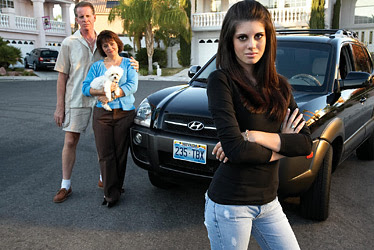 "My biggest concerns have been learning to drive in the snow and ice, and also with having a son with the aspect of 'showing off' and losing control," Albright said. "The idea of your child being injured or killed while driving makes me want to duct tape them in their rooms."

Diana Keller, owner of Elite Driving School with offices in Marion and Bucyrus, said each teen must attend 24 hours of classes before they can get their driver's license in Ohio.

"Each class focuses on different topics," Keller said. "We start out with things like road signs and safety at railroad crossings then get into how to scan for oncoming traffic, deer and other things, how texting affects driving, how to drive in different types of weather and several other important topics."
Keller said teens can begin the classroom work when they are 15 years and five months old.

"Then they can drive with anyone over the age of 21, preferably a parent or guardian, for 50 hours," Keller said. "After they complete their classroom work, they then must do eight hours in the car with a driving instructor."

» Motor vehicle crashes remain the No. 1 cause of death for adolescents.
» The greatest lifetime chance of crashing occurs in the first six months after licensure.
» The overwhelming majority (75 percent) of serious teen driver crashes are caused by "critical errors," with the three common errors accounting for nearly half of these crashes. They include lack of scanning to detect and respond to hazards, going too fast for road conditions and being distracted by something inside or outside of the vehicle.

Richmond said environmental conditions such as poor weather, vehicle malfunction, or aggressive driving, or physical impairments such as drowsy driving are not primary factors in most crashes and. The fatal crash rate for drivers ages 16 to 19, based on miles driven, is three times higher than for drivers ages 20 and older. Nationally in 2010, a total of 3,115 teens ages 13 to 19 died as a driver or as a passenger of a teen driver. He said that statistics show that teen passengers and cellphones are two distractions proven to kill teens.