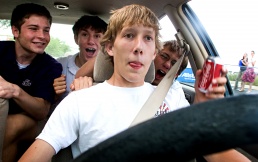 By SARAH CRICHTON  sarah.crichton@newsday.com
About one-third of all fatal car crashes are caused by speeding, but for 16- and 17-year-old drivers, the numbers rise to almost half when there are three or more passengers, according to a new study.

Motor vehicle crashes are the leading cause of death for teens, according to the Federal Highway Safety Administration.

This week is National Teen Driver Safety Week, and the AAA Foundation for Traffic Safety released its latest findings to highlight how the prevalence of risky behavior generally grows for drivers ages 16 and 17 when teen passengers are present.

For 16- and 17-year-old drivers involved in fatal crashes, the analysis found:

Prevalence of alcohol similarly rose from 13 percent to 17 percent and 18 percent.

The foundation analyzed data on fatal crashes in the United States from 2005 through 2010. Researchers found 9,578 drivers age 16 and 17 were involved in fatal crashes, and that 3,994 of these included at least one teen passenger. All risk factors were more common among male drivers.

New York State's graduated driver licensing program, which took effect Sept. 1, 2003, limits teens with learner permits and junior licenses to driving only from 5 a.m. to 9 p.m. in Nassau and Suffolk, except for limited travel to work, school and driver's education, with proof required. It also caps the number of passengers under 21, among other restrictions.

An earlier foundation report found loud conversation and horseplay were substantially more common with multiple teen passengers than with siblings or adult passengers.


These are some of the very reasons that we developed the LynxSafe Teen Driving Monitor.

One of the scariest days in any parent’s life is that moment you hand them the keys for their first night out on the town.

As my own Mother has often said; “I would lie awake every night, until I heard the garage door open. Only then, could I get good nights sleep!”

Actually, if Mom had known the way I was driving; those nights would have been even more restless!

After a personal family tragedy involving teen driving, I began to really think about my two children that had yet to begin the driving process and made the determination that I would not sit back and do nothing, other than say a prayer and keep my fingers crossed.

Telematics has been on the rise over the past few years and has really made a leap into mainstream public, thanks to a gal named Flo and Progressive Insurance’s product offering called “Snap Shot”

“Snap Shot” is a product that simply plugs into your vehicles diagnostic port and harvests data, based on driving habits, for the insurance company.

Known as UBI (User Based Insurance), the insurance company’s actuaries will assign a risk assessment profile to the individual driver and either slightly increase or lower premiums based on the data accumulated.

As one insurance company CEO recently remarked to me; “Telematics is to the insurance industry, what credit score was five years ago.”

Credit scores used to be accurate indicators of a drivers risk profile and predictors of the likelihood to be involved in an accident.

However, now that credit laws and new regulations on lending have changed due to the economy, many people that were previously considered “good credit profiles” are now considered marginal to poor, due to no fault of their own.

What was once an accurate indicator of risk factor for an individual driver was now becoming viewed as increasingly inaccurate?

Telematics provided a “game changer” to the insurance industry, with accurate indisputable driver profiling as a result of individual driving habits and real time monitoring.

While this is a great product and many of the top insurance companies are now moving to a UBI model, there is still a basic flaw to me; As a parent, I want to know my kid is a bad driver….the second he is a bad driver and not…2 weeks after it’s too late, when my insurance company tells me his driver score went down 3 points.

The LynxSafe Teen Driving Monitor, by Lynx Telematics has allowed us to develop device that simply plugs into the drivers diagnostic port that allows a parent to monitor in real-time EXACTLY what their teen drivers are doing behind the wheel.

Once the LynxSafe device is installed, a parent logs onto their personal website and sets up parameters or rules, that they expect their teenager to follow when behind the wheel.

Along with rules and boundaries, a parent or loved one, chooses how they want to be notified, either by smart phone, with live map locations when violations occur, or by any internet enabled device. As for me, I like seeing on my smart phone exactly where my kid is…the moment they have broken a rule.

For example, I want to eliminate his or her ability to text and drive or browse his web enabled smart phone, I can now take full control over that deadly habit with our Anti-Texting” technology.

Next, thanks to a “Speed by Street” feature, I only want my son to drive no more than 5mph over the speed limit on any given highway or street.

With our “On Star” like capabilities, I can set up a collision alert and have the peace of mind to know that if any fender bender occurs, our 24/7 call center has already contacted my child before I even have a chance to call.

I can also set up other parameters such as excessive RPM’s, jack rabbit starts, panic breaking, cornering too hard as well as a special feature called “Boundaries”

If my son or daughter happens to be grounded and I only want to allow them to drive back and forth to school and work, I can set up a boundary that will notify me the second they leave that zone or if they cut out of school early, I will know the moment they leave the lot.

As a parent, I can also monitor specific engine diagnostics such as low fluids, mechanical glitches and head off future expensive repairs.

Or if my daughter is at the movies and leaves her lights on, I can be at home and receive an urgent alert that her battery has dipped below 12 volts thereby calling her to go start her car and avoid the potentially unsafe practice of asking a stranger in a movie parking lot at 11:30pm for assistance.

And thanks to a login screen that shows a live GPS location of where my monitored vehicle is, I now never have to hear that excuse; “Sorry Dad, my phone battery was dead.” Or “I apparently had no coverage.”

By the way, guess what car my Daughter will use for her dates!

Our goal at LynxSafe, is not to “bust” our kids and have cause to punish them rather to let them know that Mom and Dad, are still along for the ride.

As our slogan says; “They have the license, they have the keys…and now you have peace of mind!”